For engineers, modern automotive design is a balancing act fought between what they’re capable of creating and what will comply with federal regulations. While the latter have greatly improved the safety and efficiency of mass-produced vehicles over the years, they have also created boundaries that engineers must work within. Concept vehicles, on the other hand, are never intended for production. In turn, incredible “what if” vehicles like the 707-horsepower Jeep Wrangler Trailcat become possible. In order to achieve the look that Jeep wanted for the Trailcat, they installed a swept back windshield with a two-inch chop versus the standard Wrangler, and the wheelbase has been lengthened to 108 inches, though it is safe to assume that was at least partially out of necessity to fit the industrial-grade mechanicals found here. Along with LED headlights and off-road lights, the Trailcat sports a modified "Power Dome" vented hood to provide better heat extraction and breathing for the supercharged motor, and a pair of custom-built tube doors help complete the look. 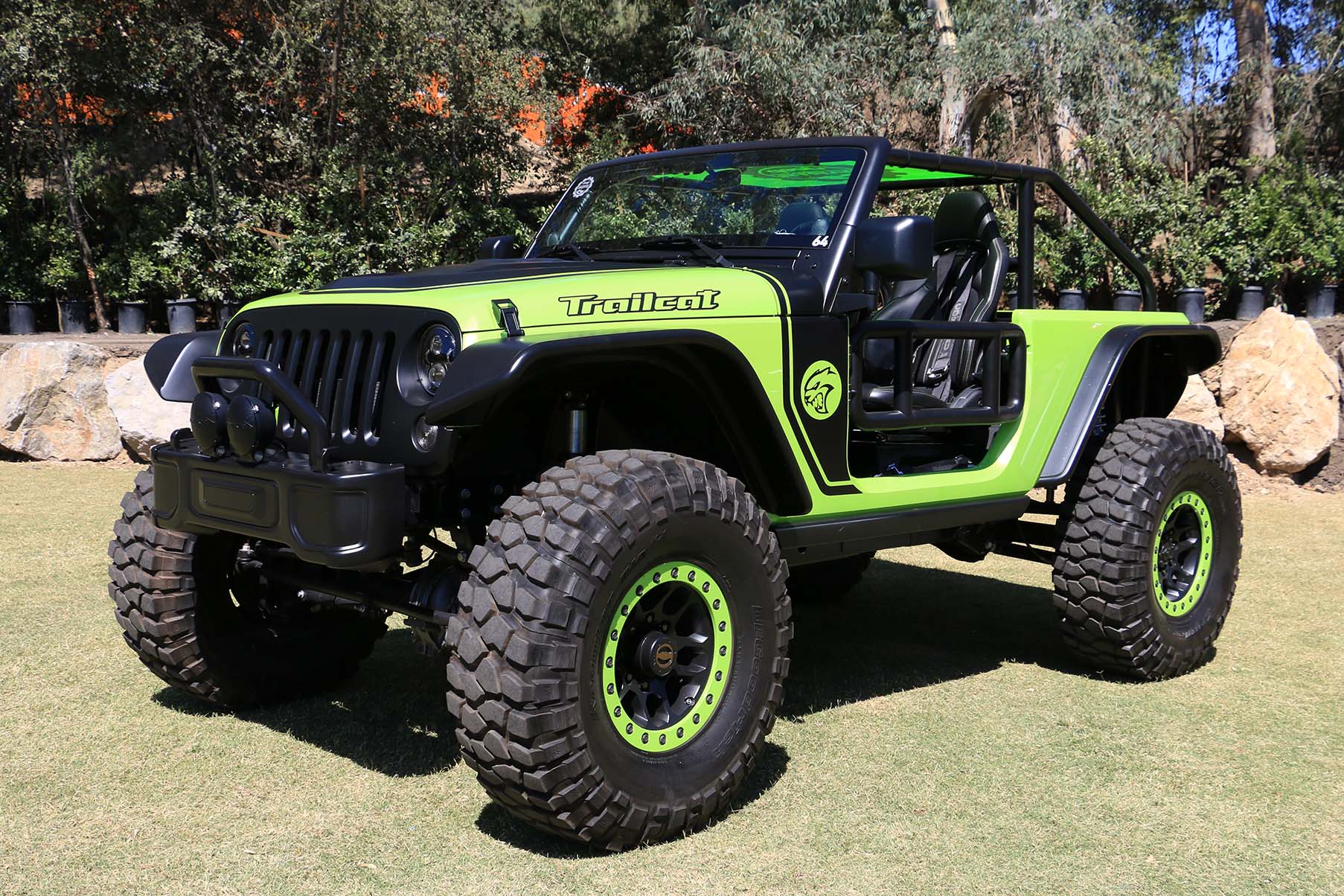 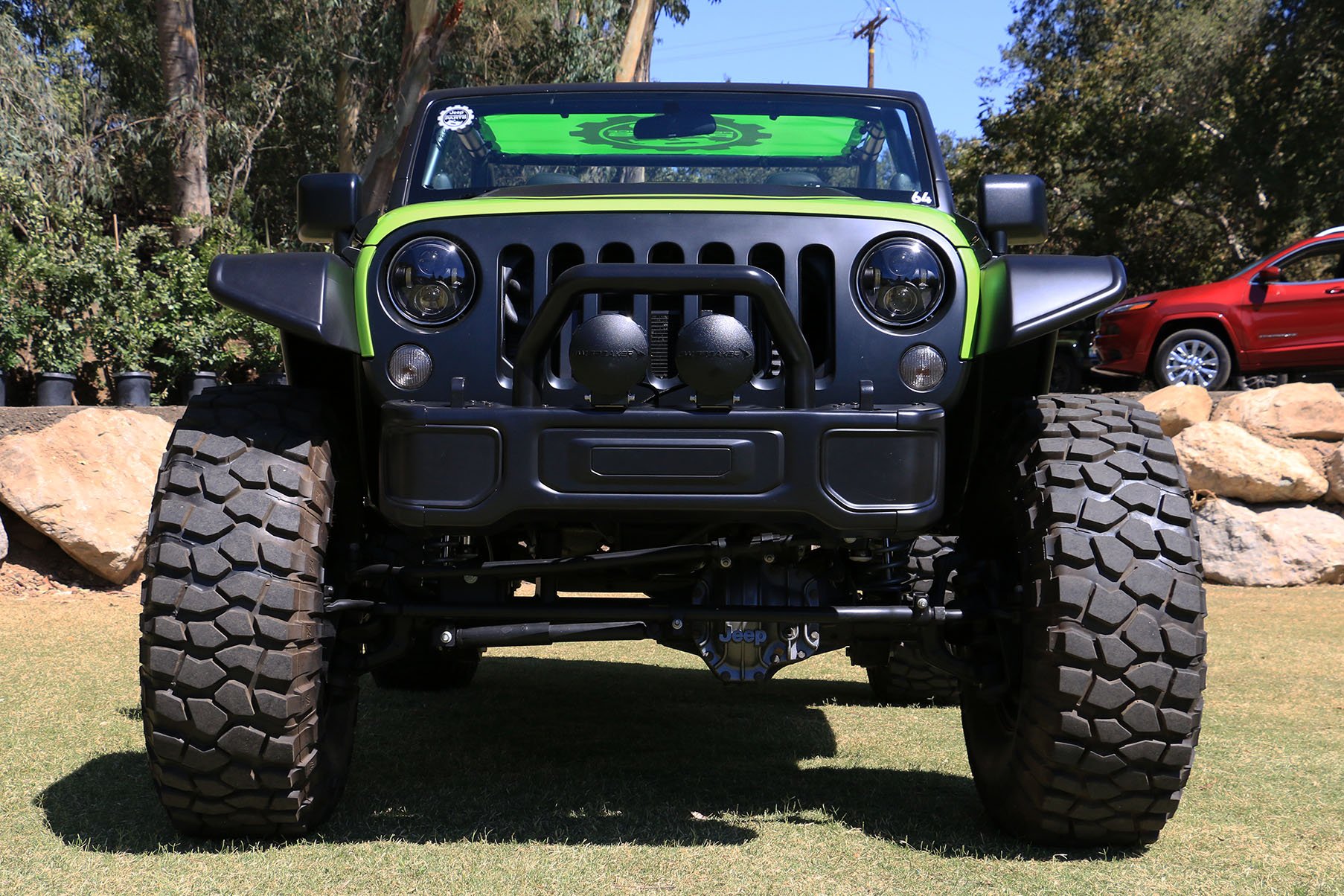 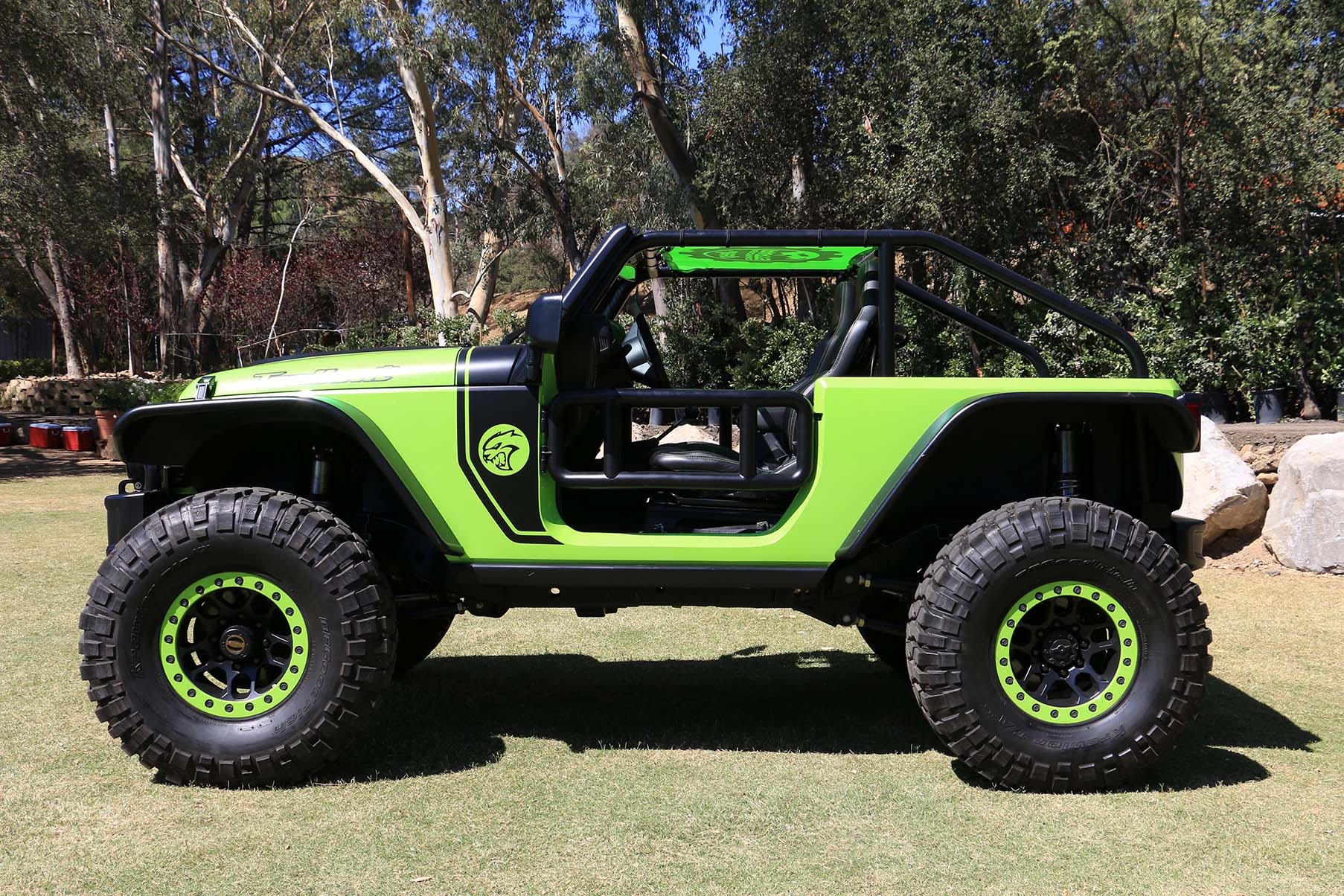 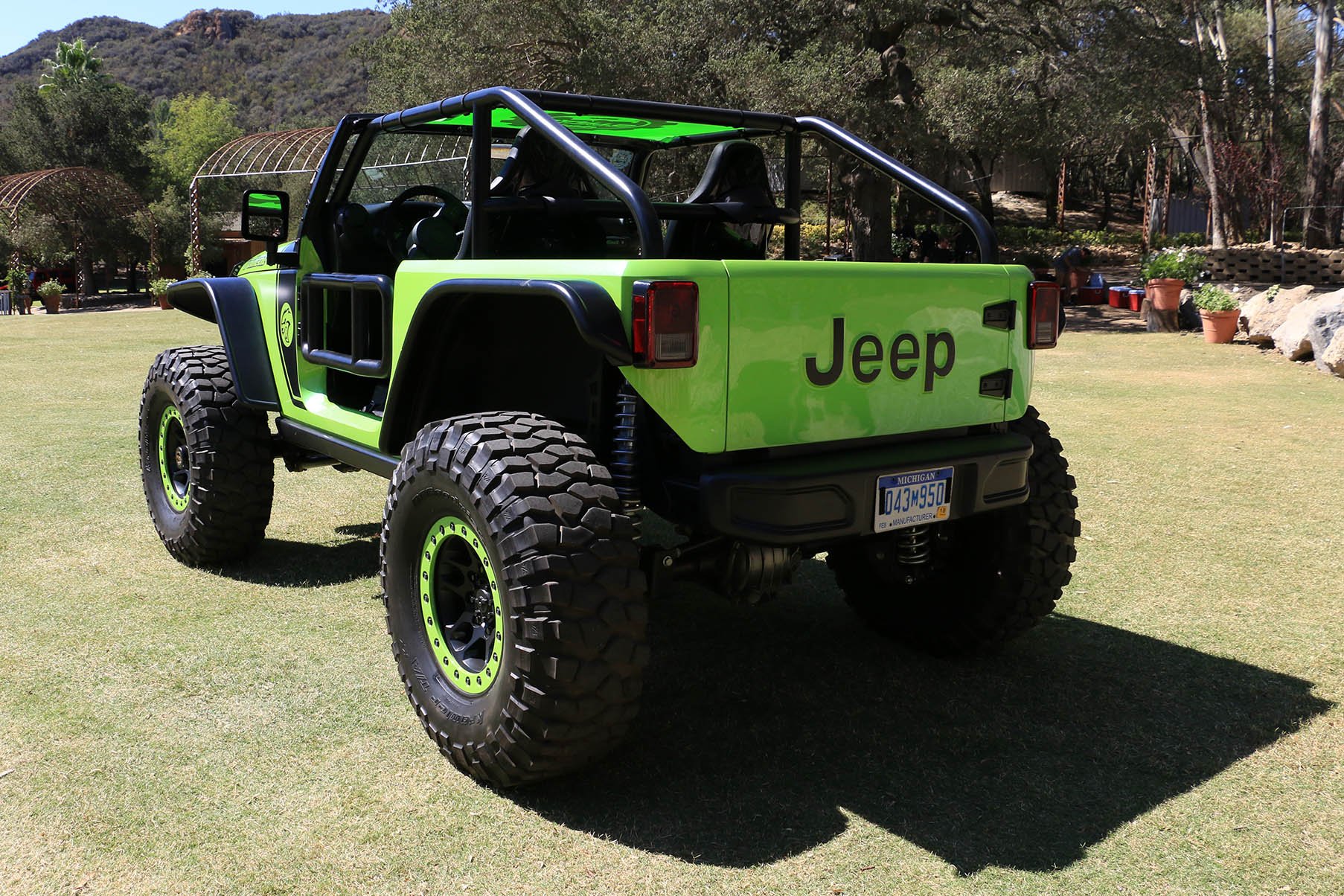 If the Trailcat looks bigger than a normal Wrangler, that's because it is. And we're not just talking about the jacked-up suspension and 40-inch BF Goodrich Krawler tires. It's been stretched 12 inches beyond the length of a standard Wrangler. In part to make room for the suspension bits and also to provide space for the supercharged 6.2-liter V8 and its six-speed Tremec TR-600 manual gearbox.

The suspension has been upgraded with Fox shocks and Eibach springs to both improve wheel articulation and provide more body clearance for the massive 40-inch tires. Jeep engineers also made some significant changes to the platform itself, chopping the windshield by two inches and extending the wheelbase to almost 108 inches to provide room for the new components. Jeep says the Trailcat is “equally at home on Moab’s rugged trails or a high-speed section”, and we would add a Mad Max film set to that list as well. 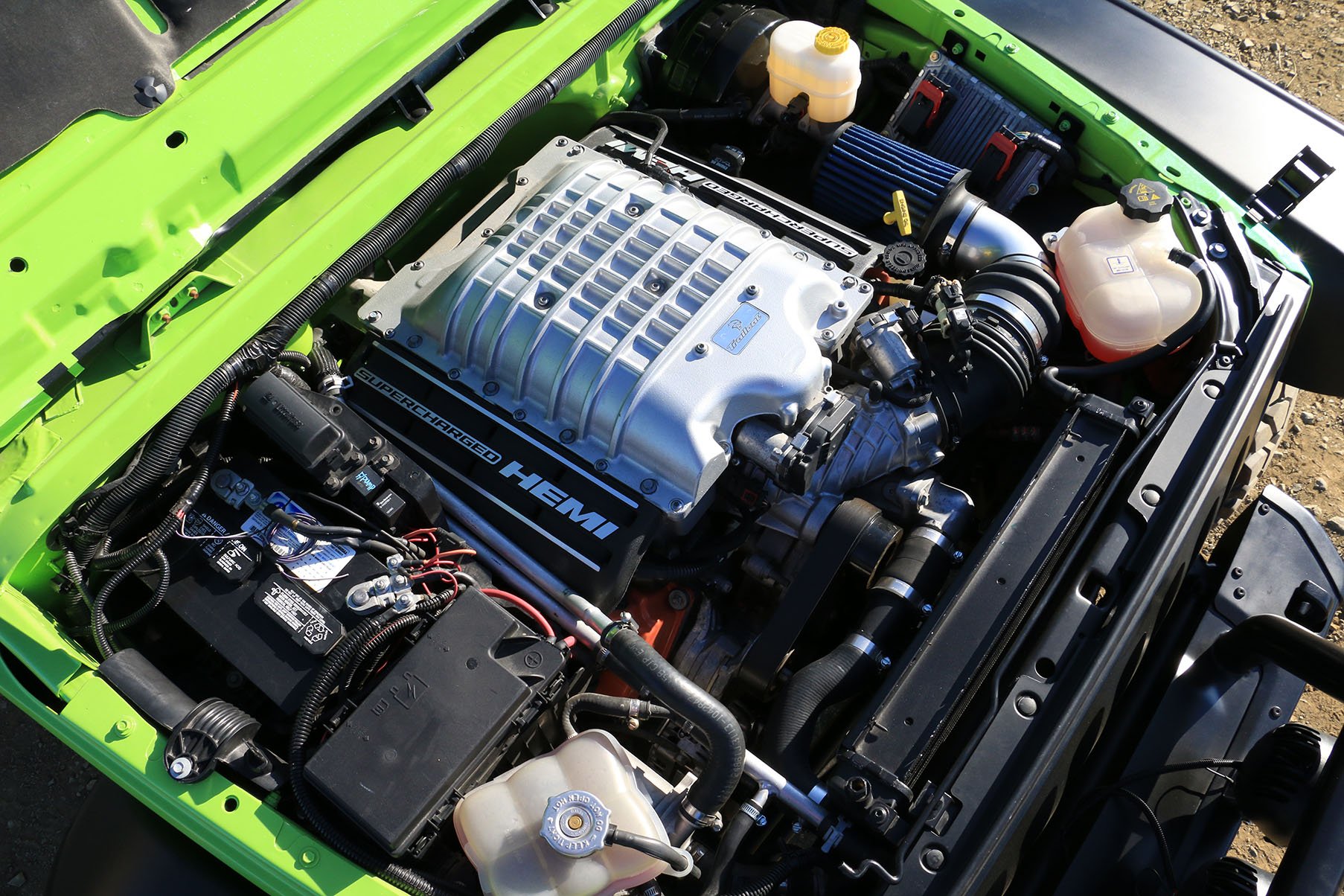 Despite the fact that the Trailcat is an impressive piece of machinery for a multitude of reasons, it's hard for the Hellcat motor not to steal the show every time the engine gets turned over. It's certainly a tight fit in the Wrangler's engine bay, and unlike the Challenger and Charger, the battery is installed up front. Mechanically, the motor is identical to the powerplant in Dodge's coupe and sedan which generates a peak torque figure of 650 lb-ft of torque and 707 horsepower. It plays its song through a pair of Borla performance mufflers, the tailpipes of which are pointed downward for maximum rumble effect.

Like the doors, the Trailcat’s grille guard is a custom fabricated piece, and all of the concept’s accents have been given a satin black paint hue. Taken as a whole, the Trailcat is like something you might’ve scribbled on your notebook back in the day when you were daydreaming in class; except this is far more awesome because it’s not only a real, tangible thing – it actually goes like hell too. Jeep could have easily created a roller concept to take to car shows and other events, but instead they built this very mechanically sound 4×4 instead. It’s almost certainly not headed to production, but just the fact that they created it is cause for glee. 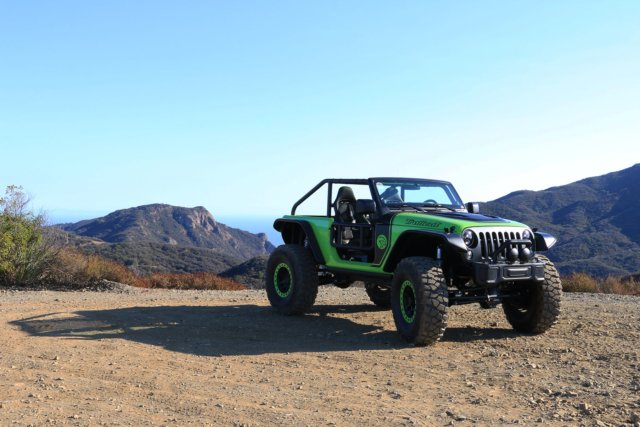 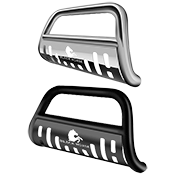 Manufacturers have numerous names: grille guards, winch protectors, prerunners, light bars, brush bars, bull bars, bush guards, push bars, and bush bars. Whatever you call them, all were designed with the purpose of protecting the vehicle's front end. Black Horse Off Road's Grill guards, Bull Bars, and Front Runners provide customized protection for the front end of your truck or SUV. For instance, a Toyota Tundra Bull Bar and a Ford F-250 come in a variety of styles. These different types of grille guards include front end grille guards that wrap over your headlights and center grill guards that only protect the middle of your front-end.

Each one of our fully contoured guards is designed specifically to fit the unique design of every vehicle. Our high quality, meticulously constructed product line is sure to not only meet, but exceed your off-road demands every time. Imagine that Sierra Bull Bar on your GMC!

Bull bars are designed to offer more protection than a grille guard, featuring a wide tubular design and heavy duty construction. Whether it's a Dodge Ram Bar or a Colorado Bull Bar on your Chevy; Black Horse Off Road bull bars are made to directly bolt up to your specific vehicle and come complete with all the necessary installation hardware and step-by-step instructions, enabling you to mount them just about anywhere your truck is parked!

Bull bars and skid plates make the ideal upgrades for Dodge trucks. Also serving as must-have upgrades for Toyota off-road drivers, they safeguard your front end, protecting your engine while keeping your grille pristine. They combine function and design to create a look of strength that's also more subtle because they don't extend upward as far as a grille guard does. And, bull bars typically come equipped with pre-drilled holes or tabs that make it easy to attach off-road fog lights or driving lights.
Last edited: Jan 11, 2022
Click to expand...