Can The Jeep Wrangler Outperform The New Land Rover Defender And Mercedes G350 Off Road? 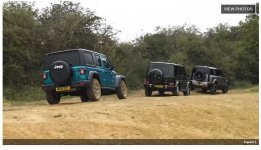 Mercedes wins with its superior, diesel torque, after the three SUVs lineup for an off-road drag race, up a hill. The Defender, which is driven by Matt, is just a hair behind the G-Class, but Matt reckons he would have won if he didn’t have to swerve left because of the narrow course. Meanwhile, the Wrangled is last. First place gives the “Merc” 3 points, while second and third place gets two and one points, respectively.
Share:
Facebook Twitter Reddit Pinterest Tumblr WhatsApp Email Share Link
Top